It's that time of the year, where we take a good look at how things are going by asking the community at large -- both Rust users and non-users. And wow, did you respond!

The scale of the feedback was both inspiring and humbling, and we've worked hard to read through all of your comments and suggestions. There were so many helpful ideas and experiences that people shared, and we truly do appreciate it. Without further ado, let's take a look.

Just as we saw last year, 2/3rds of responses are from Rust users and the remainder from non-users. This year, we separated out the "don't use Rust" to capture those who used Rust and stopped from those who never used Rust. It's inspiring to see so many developers wanting to help us make Rust better (even if they don't use it!) so that it can reach even more people.

We'll talk more about Rust non-users later in this report, but first let's look at the responses from Rust users.

This year, we're seeing a growing amount of experienced users sticking with Rust, with the "more than a year" users growing to over 42% (up from 30% from last year). The beginners are also an impressively large set, with the "less than a month" crowd at just about 18%, meaning we're currently attracting nearly a 1/5th of our user base size, even as it grows larger, every month.

People are working with ever-larger amounts of Rust, with medium- and large-scale lines of code totals both nearly doubling since last year as a percentage of the whole, now making up 16% of respondents (up from last year's 8.9%). This shows a growing interest in using Rust in ever-larger projects, and a growing need for tools to support this growth. 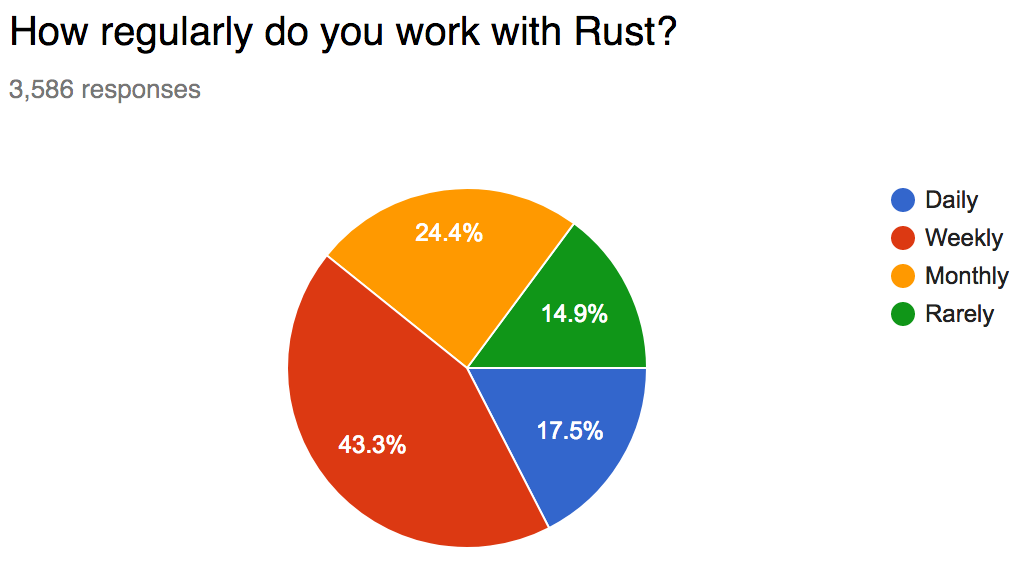 In the last year, we made big strides in breakages caused by releases of the compiler. Last year, 16.2% of respondents said that upgrading to a new stable Rust compiler broke their code. This year, that number has fallen to 7.5% of respondents. This is a huge improvement, and one we're proud of, though we'll continue working to push this down even further. 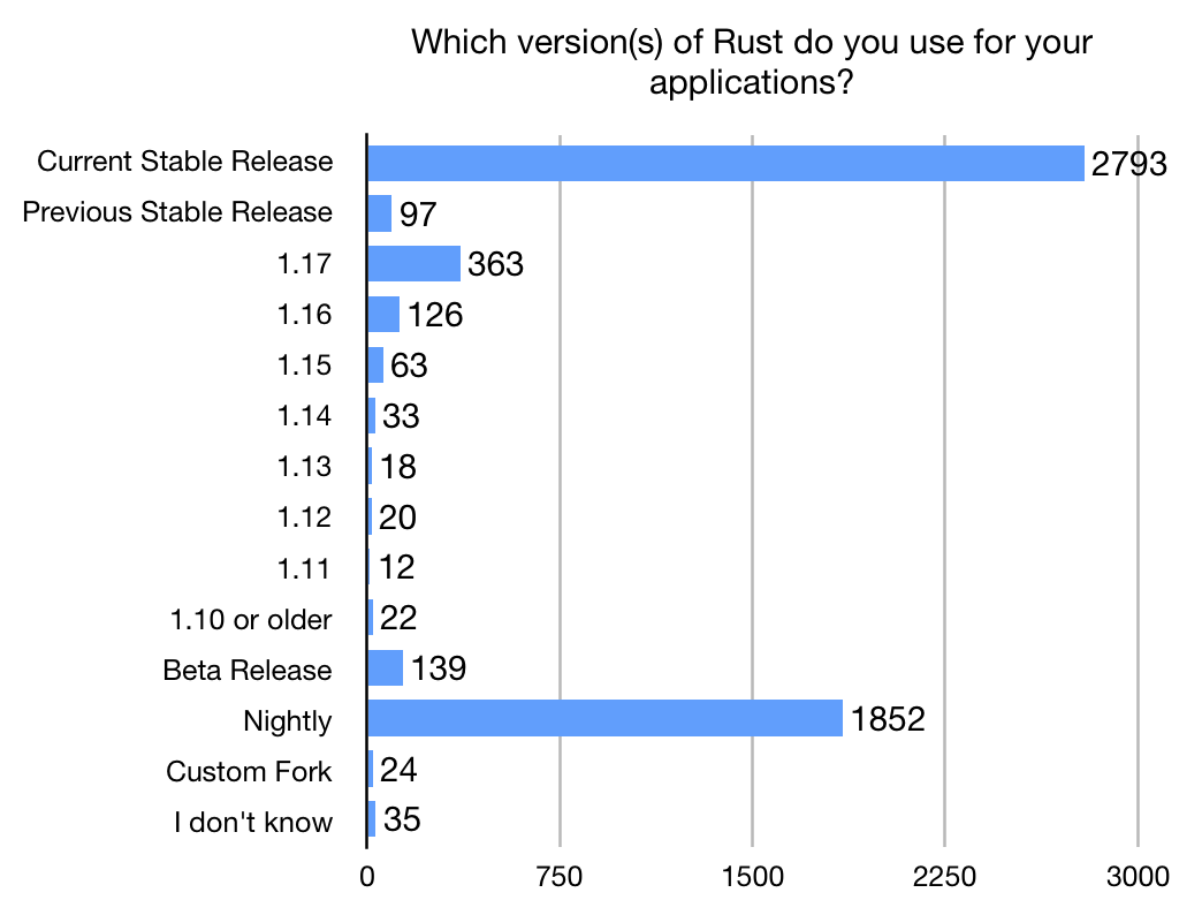 Developers have largely opted to move to nightly or a recent stable (with some on beta), showing that developers are eager to upgrade and do so quickly. This simplifies the support structure a bit from last year, where developers were on a wider range of versions.

Stable users now make up 77.9% of Rust users. Unfortunately, despite our efforts with procedural macros and helping move crates like Serde to stable, we still have work to do to promote people moving away from the nightly Rust compiler. This year shows an increase in nightly users, now at 1,852 votes it represents 51.6% of respondents using nightly, up from 48.8% of last year.

How we use Rust 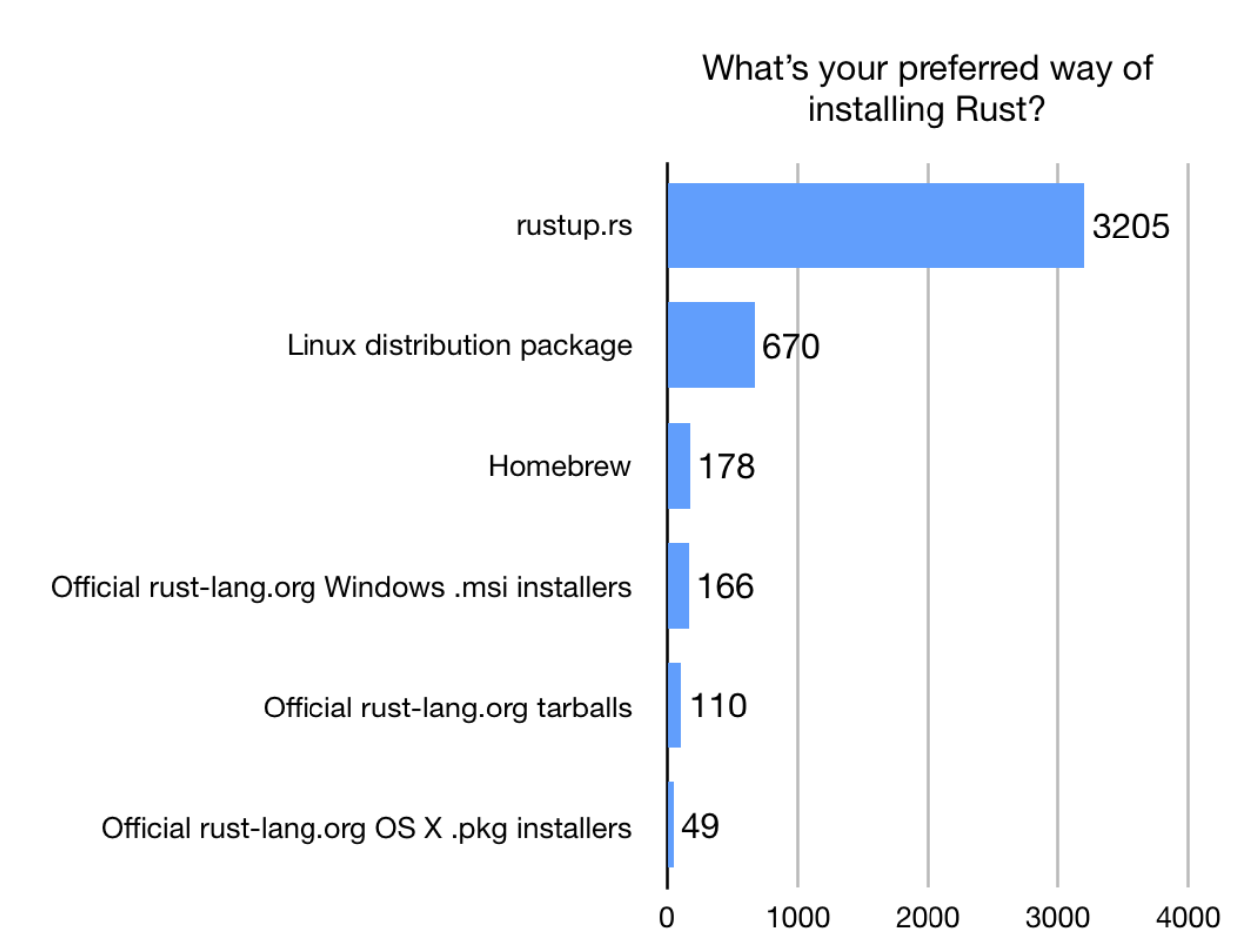 One of the big success stories with Rust tooling was rustup, the Rust toolchain installer. Last year, we saw a wide diversity in ways people were installing Rust. This year, many of these have moved to using rustup as their main way of installing Rust, totalling now 3,205 of the responses, which moves it from last year's 52.8% to 90.2%.

Linux still features prominently as one of the main platforms Rust developers choose. Of note, we also saw a rise in the use of Windows as a developer platform at 1,130 of the 3,588 total respondents, putting it at 31.5% of respondents, up from 27.6% of last year.

Next, we asked what platforms people were targeting with their Rust projects. While we see a similar representation of desktop OSes here, we also see a growing range of other targets. Android and iOS are at healthy 9.9% and 5.3% respectively, both almost 10x larger than last year's percentages. Embedded also has had substantial growth since last year's single-digit percentage. As a whole, cross-compilation has grown considerably since this time last year.

Among editors, vim remains king, though we see healthy growth in VSCode adoption at 34.1% (up from last year's 3.8%). This growth no doubt has been helped by VSCode being one of the first platforms to get support for the Rust Language Server.

Users who use Rust part-time in their companies showed a growth in larger projects since last year, with the medium- and large-scale projects taking up more percentage of total projects this time around. 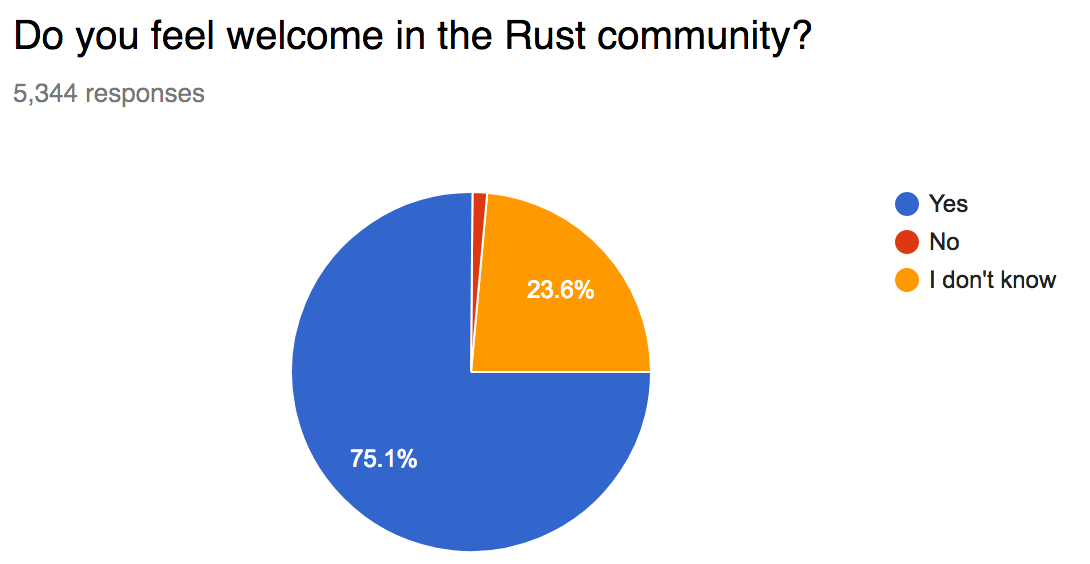 An important piece of the Rust community is to be one that is welcoming to new users, whether they are current users or potential users in the future. We're pleased to see that over 3/4th of all respondents said they feel welcome in the Rust community, with 23.6% not sure.

The demographics of respondents stayed about the same year over year. Diversity and inclusiveness continue to be vital goals for the Rust project at all levels. The Rust Bridge initiative aims for diversity at the entry level. The Rust Reach project, launched this year, brings in a wide range of expertise from people underrepresented in the Rust world, and pairs them with Rust team members to make Rust more accessible to a wider audience.

New this year, we separated out the people who had stopped using Rust from those who had never used Rust to better understand why they stopped. Let's take a look first at when they stopped.

The first surprise we had here was how long people gave Rust a try before they stopped. Our initial hunch was that people would give up using Rust in the first day, or possibly the first week, if it didn't suit them or their project. Instead, what we see is that people tried Rust for a much longer time on average than that. 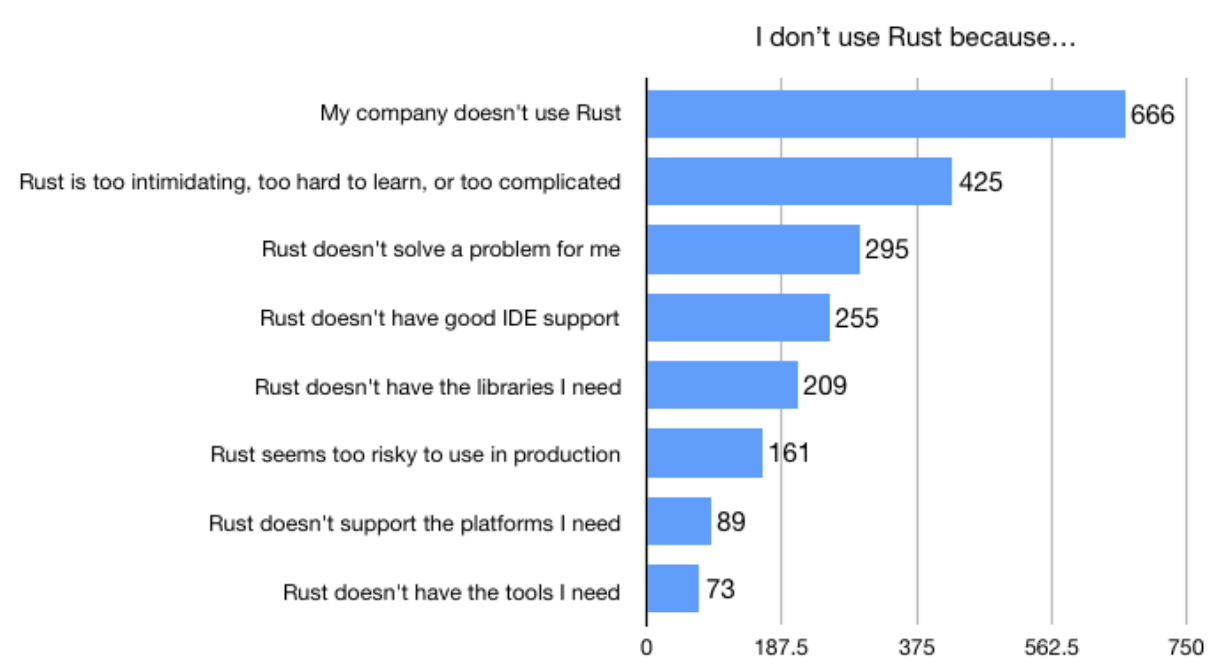 While the learning curve and language complexity still played a role in preventing people from picking up Rust, one aspect that resonated with many people is that there just simply aren't enough active commercial projects in Rust for people to be a part of. For some, they could surmount the learning curve if there was strong incentive to do so.

Finally, at the end of the survey we we provided a free-form area to talk about where Rust could improve. Before we get to the themes we saw, we wanted to give a big "thank you!" to everyone who posted thoughtful comments. There are many, many good ideas, which we will be making available to the respective sub-teams for future planning. With that, let's look at the themes that were important this year:

We're blown away by the response this year. Not only is this a much larger number of responses than we had last year, but we're also seeing a growing diversity in what people are using Rust for. Thank you so much for your thoughtful replies. We look forward to using your feedback, your suggestions, and your experience to help us plan for next year.