cargo-audit is a command-line utility which inspects Cargo.lock files and compares them against the RustSec Advisory Database, a community database of security vulnerabilities maintained by the Rust Secure Code Working Group.

This post describes the new features in the 0.11 release of cargo-audit.

One of our most requested features (especially by fans of the similar npm audit fix command), the new cargo audit fix subcommand will attempt to automatically update version requirements for vulnerable dependencies to non-vulnerable versions.

Note that this is an experimental new feature which isn't enabled by default. To try it out, install cargo-audit with the following:

This will perform the same audit process as cargo audit initially, and then attempt to apply fixes to your Cargo.toml: 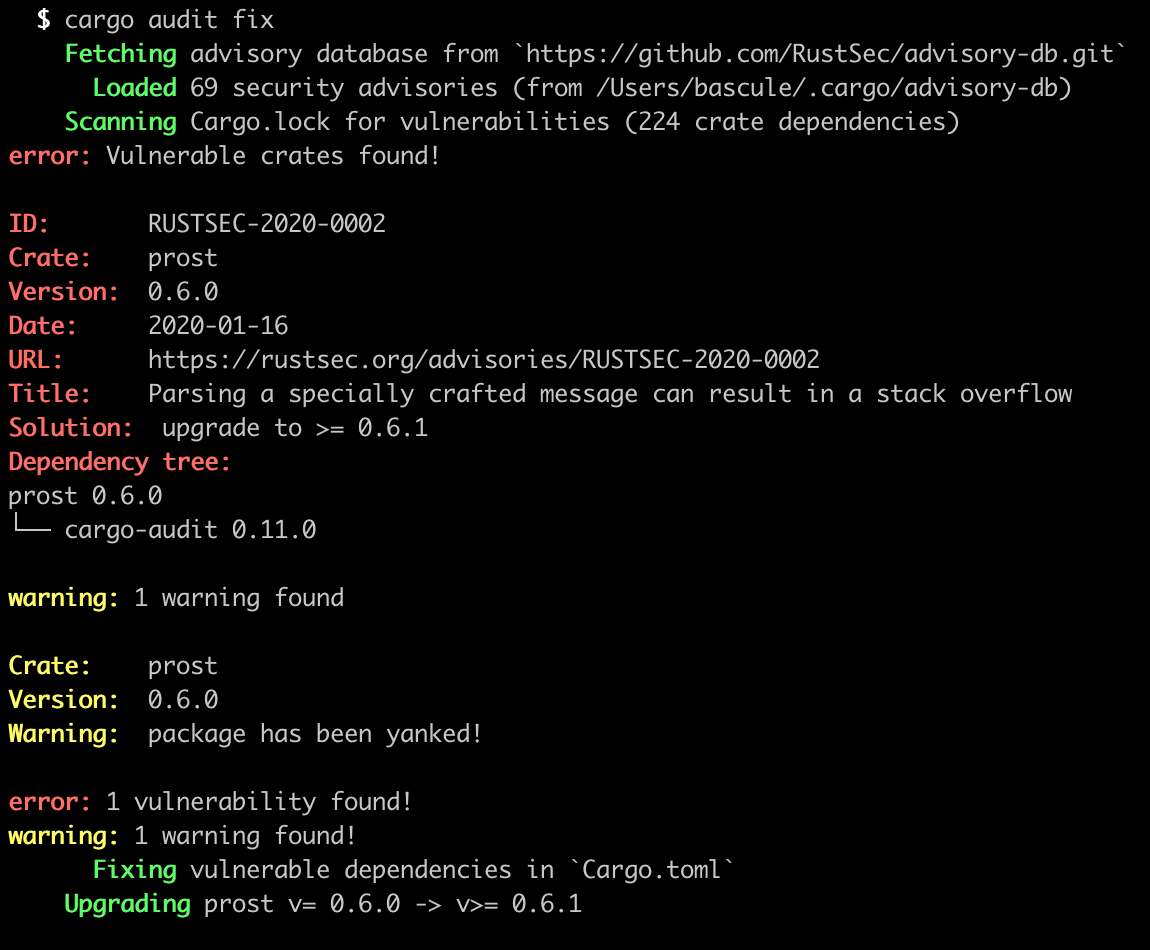 Under the hood, it uses cargo-edit (as a library) to perform modifications to your Cargo.toml file, using the fixed version requirements listed in the advisory to try to perform an automatic upgrade to a non-vulnerable version of a dependency for each advisory.

Note once more that this is a new, experimental feature and as such it's bound to have bugs. If you're worried, you can use cargo audit fix --dry-run to perform a dry run only. And if you do encounter bugs, please file a bug report.

We'd like to thank Reza Fatahi and Hanif Ariffin for their work in contributing this feature.

As you can see in the screenshot above, cargo audit now checks each of the crates in your Cargo.lock file against the crates.io index to determine if any of them have been yanked. If they have, it will emit a warning as per above.

If you'd like for yanked crates to be a hard failure, you can run cargo audit with the -D command-line argument:

or if you prefer to be more explicit:

Compatibility with the new "V2" format for Cargo.lock

cargo audit consumes Cargo.lock directly, and while the V2 format change didn't break the core vulnerability-auditing functionality of cargo audit, several minor features regressed because of this, such as displaying dependency trees for vulnerable dependencies.

This release also upgrades to version 4.0 of the cargo-lock crate, which includes full support for the V2 Cargo.lock format and constructs a representation of a lockfile which is the same across the V1 and V2 formats.

If you noticed dependency trees failing to display after upgrading to the V2 Cargo.lock format, they should now be working again!

Thanks for reading, and we hope you enjoy cargo-audit 0.11!