Support has landed in the nightly compiler for source-based code coverage, and we want your help testing it!

What is source-based code coverage, exactly?

You may already be familiar with code coverage, which shows you which lines of code execute. Code coverage is usually applied to tests to find out which code is actually being tested and which code isn’t.

Nightly Rust already supports another kind of source code coverage, commonly called gcov, which relies on debug info to map from LLVM IR to lines of source code. Instrumentation is then added in the LLVM backend during code generation to count how many times each line is run.

However, since LLVM doesn’t know exactly how Rust code is structured, there’s a lot lost in the translation between Rust source and LLVM IR. Line-level granularity is sometimes too coarse, and debug info can be unreliable, especially when building in release mode. The result is coverage reports that only show an approximation of what code actually executed.

Source-based code coverage instrumentation is applied by the Rust compiler, not LLVM. This instrumentation is more precise because it's being done in MIR, which holds a mapping between the original Rust source code and the control-flow graph of the program.

That means things like short-circuited conditionals, closures, and match guards are all precisely counted. And since instrumentation counters are injected as regular MIR statements, the compiler can further optimize the program without affecting coverage results. 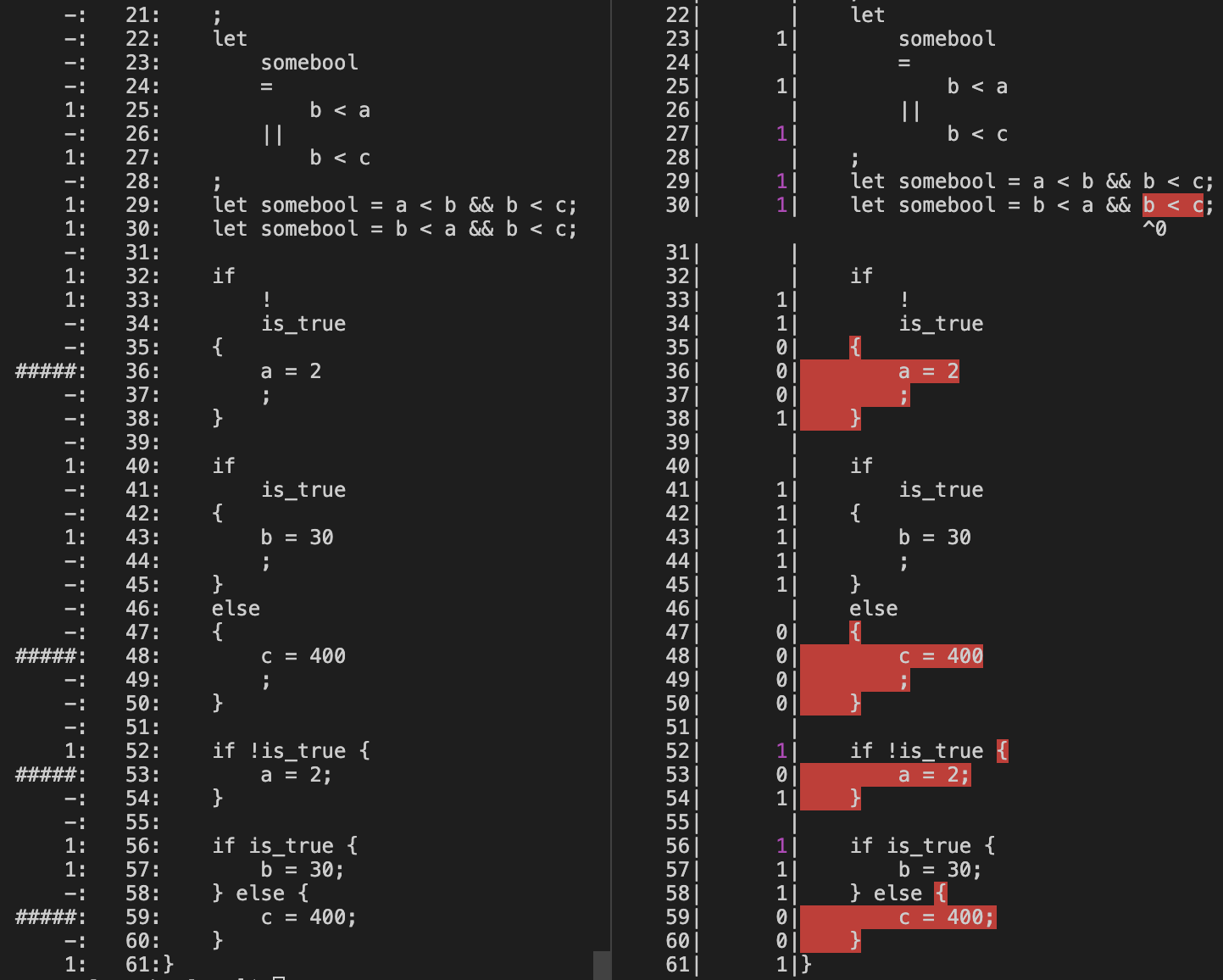 What this means is that source-based code coverage is both efficient and accurate. LLVM’s existing coverage tools (llvm-profdata and llvm-cov) generate both coverage summaries and very fine-grained code regions, helping you find gaps in your testing coverage. What you do about that is up to you!

Work on the implementation began back in April, and many PRs later, it’s ready for you to try. All you need is a recent nightly and a tool to read the coverage reports.

Take a look at this guide to get started. If you spot any issues, please report them. It’s a huge help!

Finally, if you try it out and it works well, we’d also like to hear from you! Come by the Zulip stream for this change or comment on the feature request.

The implementation work was all done by Rich Kadel; thanks to him for all the amazing work he’s done. Thanks also to Wesley Wiser for helping with reviews, to Bob Wilson for lending his experience with LLVM's InstrProf coverage APIs, and to eddyb for their guidance in choosing a MIR-based approach.