Preface: This is in response to some feedback the project directors received from the Rust Foundation staff. Some of the contributors they'd talked to said they didn't feel justified in applying for Foundation grants even though they'd love the opportunity, because they don't feel qualified or deserving of them compared to the other amazing contributors they look up to within the Rust project. This was a little bit heart breaking to me, because I know exactly what that feeling is like1, and I also know just how wrong they are.

Imposter syndrome is an insidious problem within software communities. Many of us, especially members of marginalized communities, struggle to shake the feeling that we aren't as qualified as our peers. This makes us feel unqualified and undeserving compared to those around us. It can make us hesitate to join communities in the first place and, for those already involved, it can create a sense of impending doom where you constantly feel like you're going to get found out and expelled from the community. Overall it's just not great for mental health, 0/10, would not recommend.

The thing is though, imposter syndrome is a logical fallacy2. Imposter syndrome occurs when we discount what we know and inflate what we think other people know, and this effect is often then reinforced by systemic bias for those of us who don't get the assumption of competence. 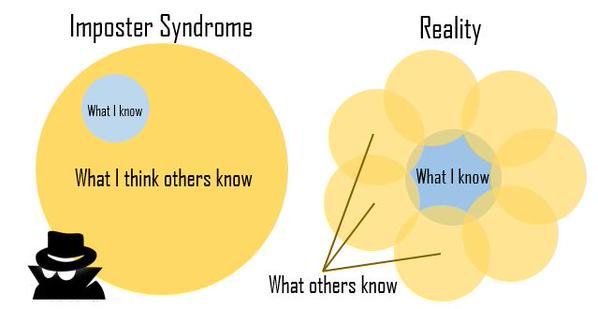 In reality, we're all specialists within the Rust project. We all have areas where we have deep expertise and other large areas where we only have the vaguest idea of how things work. Niko, one of the lang team co-leads, former compiler team lead and core team alumni, still comes to me to ask questions about error handling. I frequently need to tell my fellow contributors that I have no idea what the acronyms they're using mean3. But this doesn't mean we don't deserve our positions within the project. We don't expect every contributor to know everything, to be perfect, or to make no mistakes. The only thing we expect from our contributors is the ability to collaborate effectively with others and a willingness to learn and grow over time.

The thing that makes the Rust project as good as it is isn't a couple of prolific contributors lifting mountains by themselves, it's everyone working together that brought us to where we are today. We all make mistakes. The project has layer4 after layer5 of safeguards to make sure we have a chance to catch and fix them before they affect our users. These incidents are unavoidable, expected, and honestly fine! This is the most fundamental philosophy of both the Rust language and the Rust project: we don't think it's sufficient to build robust systems by only including people who don't make mistakes; we think it's better to provide tooling and process to catch and prevent mistakes. It isn't an accident that our motto is "A language empowering everyone to build reliable and efficient software." We want people to feel empowered to make changes they're not 100% confident in, to make mistakes, to learn, and to grow within the Rust project. This is how all of us got to where we are today!

Edit: After I posted this it was brought to my attention that the image I used and tweet I cited are not from an original source, and they can actually be traced back to a series of blog posts by Alicia Liu. These original sources do a much more subtle exploration of what is and isn't imposter syndrome, and particularly focus on how imposter syndrome impacts members of marginalized communities, I highly recommend reading these posts.

To help reinforce and normalize this, I've gathered a list of times when current or past project members have struggled with imposter syndrome, have made mistakes, have had to ask "basic" questions, and similar experiences that will hopefully help set more reasonable expectations for new and old contributors across the project.